Gold:
250gp (in the form of gold spectacles with pink crystal lenses) 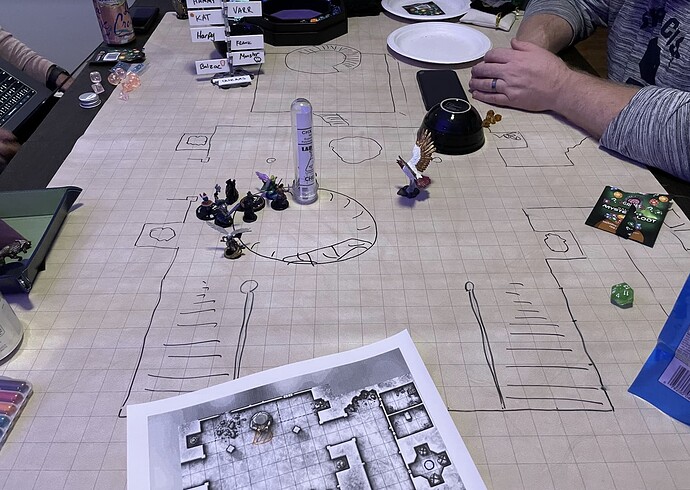 After the party converses with the lich, learning of the temples darker secrets, the tug of power begins to pull at their already compromised hearts. Especially the dark priest. Will the promise of power be too much to resist for for some of the party members? The answer is a resounding yes.

Off in search of more power, the party discusses what they might retrieve as they make their way back through the temple and to the vaults of the sarcophagi. Upon entering the east chamber, it was easy for the dark priest to say “yes, please”, to Sykane, the Soul Hungerer.

East Sarcophagus. The vestige within this sarcophagus offers the dark gift of Sykane, the Soul Hungerer. Sykane’s gift is the power to raise the recently deceased. This dark gift allows its beneficiary to cast the raise dead spell as an action. After it has been used three times, the dark gift vanishes.

As soon as this dark gift is received, the beneficiary’s eyes glow a sickly yellow until the dark gift vanishes. The beneficiary also gains the following flaw: “If I help someone, I expect payment in return.”

Excited by the power, however dark, Balzec is convinced (though no convincing was really needed for him) to move to the south chamber. Placing his hands on its sarcophagus, power leeches from the amber into the druid’s body!

South Sarcophagus. The vestige within this sarcophagus offers the dark gift of Zrin-Hala, the Howling Storm. Zrin-Hala’s gift is the power to create lightning. This dark gift allows its beneficiary to cast the lightning bolt spell as an action. After it has been used three times, the dark gift vanishes.

As soon as this dark gift is received, one side of the beneficiary’s face sags and loses all feeling.

Driven out of morbid curiosity, the half-ling bard can’t resist to find out what dark gifts are available for him, and Olikkan, having to be different, moves to another vault, to another sarcophagus. With glee, he reaches out and embraces the darkness inside:

South Sarcophagus. The vestige within this sarcophagus offers the dark gift of Shami-Amourae, the Lady of Delights. Shami-Amourae’s gift is the power of persuasion. This dark gift allows its beneficiary to cast the suggestion spell as an action, and saving throws against the spell have disadvantage. After it has been used three times, the dark gift vanishes.

The beneficiary of this dark gift gains an extra finger on each hand, as well as the following flaw: “I can’t get enough pleasure. I desire others to create beauty for me at all times.”

Power courses through their bodies, intoxicating the party. Make no matter of the sagging paralyzed face of Balzec, and the sickly, yellow eyes of the dark priest and Olikkan’s extra strange little fingers (perhaps they can be used for more complex lute chords?), they need more!

The dark priest, totally consumed by his own internal darkness seems to find a dark god encased in amber that suits his internal state:

North Sarcophagus. The vestige within this sarcophagus offers the dark gift of Savnok the Inscrutible. Savnok’s gift is the power to shield the mind. This dark gift takes the form of a mind blank spell cast on the beneficiary. The spell has an extended duration of 1 year, after which the dark gift vanishes.

The beneficiary’s eyes melt away upon receiving this dark gift, leaving empty sockets that can still see.

The fire druid overhears Varr’s conversation with Nibbs and how one of the dark god’s power might possess the power of flight. Nibbs is tempted, but remains pure. Balzec makes no pretense. He is here for power now. Another sarcophagus, Balzec reaches out…

East Sarcophagus. The vestige within this sarcophagus offers the dark gift of Tarakamedes, the Grave Wyrm. Tarakamedes’s gift is the power of flight. The beneficiary of this dark gift grows skeletal wings and gains a flying speed of 50 feet.

Drunk on power, the dark priest finds that he needs more; he embraces the filth:

West Sarcophagus. The vestige within this sarcophagus offers the dark gift of Fekre, Queen of Poxes. Fekre’s gift is the power of spreading disease. This dark gift allows its beneficiary to cast the contagion spell as an action. After it has been used three times, the dark gift vanishes.

The beneficiary of this dark gift reeks of filth.

Reeling from the power of the dark gifts, and somehow morbidly satisfied despite the horrid smell and ghastly looks, the party decides that Strahd is somehow still worth defeating and decide to go back to the small castle that might hold the holy symbol to help them in their cause. But are they really in it for the right reasons any longer?

They lazily turn the corner into the open temple floor where the 40ft statue stands forever frozen in place casting a fictitious spell. As they make their way into the open space, the smell of sulfur rises above the smell of the putrid priest, confused for a moment until three of them, Rickie, Hammy and Frank are engulfed in a fireball!

It’s at this point the party realizes that from the magical darkness that covers the face of the statue is the source of the attack. Casting spells with areas of affect seem to make the most sense, and attack they do. The angelic druid, Katrina finally casts Sunlight on the darkness and exposes the figure inside the skull of the statue. Meanwhile, Varr is able to find a clue that leads to a door at the back of the statue. The party attempts to wash out the creature with a tidal wave; moon beams are summoned! Still no creature can be found until the door is opened and they ascend the staircase. It’s then that Kat realizes that creature is invisible. Dispelling it, Varr is able to see the Arcanaloth for what it is. He warns the party of it’s fiendish nature. 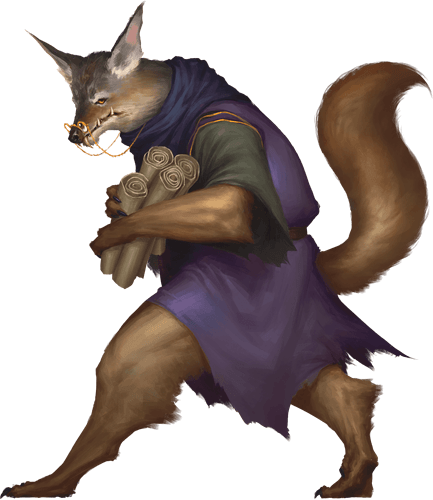 It doesn’t take long for the party to finish the creature, and for a moment, they think only of subduing it, but decide that death is its proper fate. Was it the darkness of this place that helped lead them to that conclusion or the darkness of their own heart?

The arcanaloth had on his possession a robe, spectacles and a spellbook.

The party went on their way to the room of the small castle, and maniacally, Nibbs chomped and hacked at it, with the Sunsword screaming along with him, until something tumbled to the floor. The party found the Holy Symbol of Ravenkind and immediately knew that Frank the Paladin was the only one in the party capable of yielding its holy power.

Nibbs realizes that the Sunsword is better suited for Hammy as he questions himself.

What else will this adventure do to the party? What other dark powers exist within these temple walls?