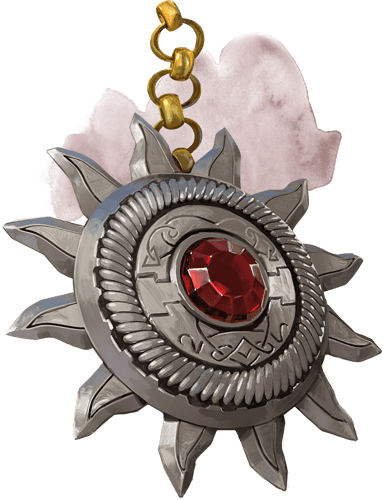 Wondrous item, legendary (requires attunement by a cleric or paladin of good alignment)

The Holy Symbol of Ravenkind is a unique holy symbol sacred to the good-hearted faithful of Barovia. It predates the establishment of any church in Barovia. According to legend, it was delivered to a paladin named Lugdana by a giant raven—or an angel in the form of a giant raven. Lugdana used the holy symbol to root out and destroy nests of vampires until her death. The high priests of Ravenloft kept and wore the holy symbol after Lugdana’s passing.

The holy symbol is a platinum amulet shaped like the sun, with a large crystal embedded in its center.

The holy symbol has 10 charges for the following properties. It regains 1d6 + 4 charges daily at dawn.

Hold Vampires. As an action, you can expend 1 charge and present the holy symbol to make it flare with holy power. Vampires and vampire spawn within 30 feet of the holy symbol when it flares must make a DC 15 Wisdom saving throw. On a failed save, a target is paralyzed for 1 minute. It can repeat the saving throw at the end of each of its turns to end the effect on itself.

Turn Undead. If you have the Turn Undead or the Turn the Unholy feature, you can expend 3 charges when you present the holy symbol while using that feature. When you do so, undead have disadvantage on their saving throws against the effect.

Sunlight. As an action, you can expend 5 charges while presenting the holy symbol to make it shed bright light in a 30-foot radius and dim light for an additional 30 feet. The light is sunlight and lasts for 10 minutes or until you end the effect (no action required).